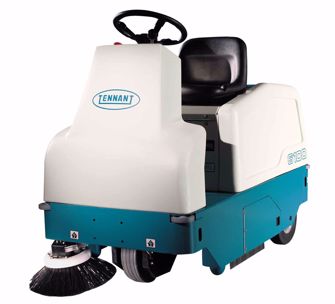 The 6100 is a compact industrial grade, self-propelled, rider sweeper, manufactured in the United States of America.  Due to its small the 6100 industrial rider sweeper can be used almost and can be placed on a standard passenger elevator to move between floors.  The 6100 ride on sweeper is ideal for sweeping small debris on any hard surface floor.  We have found that the 6100 rider sweeper also makes an excellent carpet sweeper!

At the recommended operational speed of 3.0 the 6100 industrial rider sweeper cleans at the rate of 35,600 square feet an hour.  With fully charged batteries, the 6100 on sweeper will sweep for at least four hours.  Power key ignition and emergency power kill switch are both standard features on the 6100 .  An integrated operator safety switch stops the 6100 rider sweeper unless the operator is seated.

Simple manual brush levers raise and lower all brushes, and are within easy reach of the operator.  Both side brushes and main brush turn off when the brush levers are raised.  Pictogram style use and care guide mounted on the 6100 industrial rider sweeper next to the operator seat.

Tennant’s VCS system filter shaker is another unique feature that cleans each individual filter panel pleat.  Manual cleaning of the 6100 on sweeper dust filter is eliminated altogether.  sloped grid on top of the debris hopper protects the dust panel filter from flying debris.  A tall and large rolling wheels make it easy to roll the hopper out for easy dumping.  At full the 6100 rider sweeper hopper can hold up to 3 cubic feet of debris.

The 6100 industrial rider sweeper is available with optional dual side brooms for a cleaning path.  Add the optional vacuum wand and clean tight corners and hard to reach areas.  Other popular options for are the operating headlights, and rotating hazard light.

Inquire about a machine